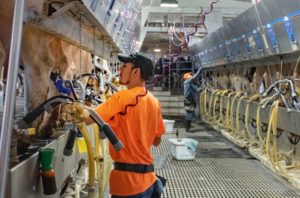 The place we are born can impact our culture—our behavior and how we view the world. Eighty percent of the agricultural workforce speaks Spanish and language is not the only barrier in the U.S. Understanding and valuing cultural differences is important to improving farm business culture.

As the U.S. dairy herd size continues to increase, so does the need for a well-trained workforce. A 2014 labor survey conducted by National Milk Producers Federation (NMPF) found that immigrant labor accounts for 51% of all dairy labor. The National Dairy FARM’s more recent 2019 survey did not ask about immigration status but did ask about primary language, which reported 53.5% of farms had employees whose native language was not English.

During a recent webinar hosted by VEX-Artex, a well-known dairy advocate, Katie Dotterer, openly shared her experiences and perspectives about cultural awareness in agriculture. “A person’s cultural awareness is ‘the understanding of the differences between themselves and people from other countries or other backgrounds, especially differences in attitudes and values,’” she notes.

Dotterer, who studied abroad in Panama, is English as a Second Language (ESL) certified and has worked with Spanish speakers in the dairy industry for more than 15 years, highly recommends taking time to learn about the culture of your dairy’s employees. “Learn about their families, their traditions, their beliefs, their food,” she says.

While Dotterer is well versed in both the Spanish language and culture, she states that no one expects you to know everything about their culture. “But they do expect you to respect it.”

English is one of the hardest languages to learn, Dotterer notes. She holds two degrees in business management and secondary education, where she has taught both business and Spanish in middle and high-school settings. Additionally, she has developed and instructs dairy-focused Spanish courses and recommends learning keywords or phrases in Spanish, to show respect to employees. “Learning how to say, ‘Good Morning’ or asking, ‘How are you?’ in Spanish illustrates you care to your employees.”

During the webinar, Dotterer firmly stated, “’Don’t be an arrogant jerk,’ and make statements like: “They speak Mexican.”

Admittedly, Dotterer cringes when she hears statements like this and remarks that there is a big difference between arrogance and ignorance, stating that 20 countries have Spanish-speaking people. “Mexican is a nationality, not a language,” she exclaims.

Dairy farms can benefit from fresh viewpoints and ideas that employees from varied cultural backgrounds can bring to a business. “Providing ongoing feedback to employees and conducting trainings in their native language is key to bridging communication gaps and creating a healthy work environment,” says Nicole Ayache, senior director of sustainability initiatives for NMPF.

Bilingual offerings are a great first step, but according to NMPF, farms shouldn’t stop there. The FARM Human Resources Manual provides guidance about establishing good on-farm culture and communication, which include understanding and valuing the diverse perspectives of employees.

Dotterer concludes, “Embrace differences, reach across cultural borders and you’ll open yourself up to a whole new world of possibilities and experiences.”