Tail Docking: The Difference a “Switch” Can Make 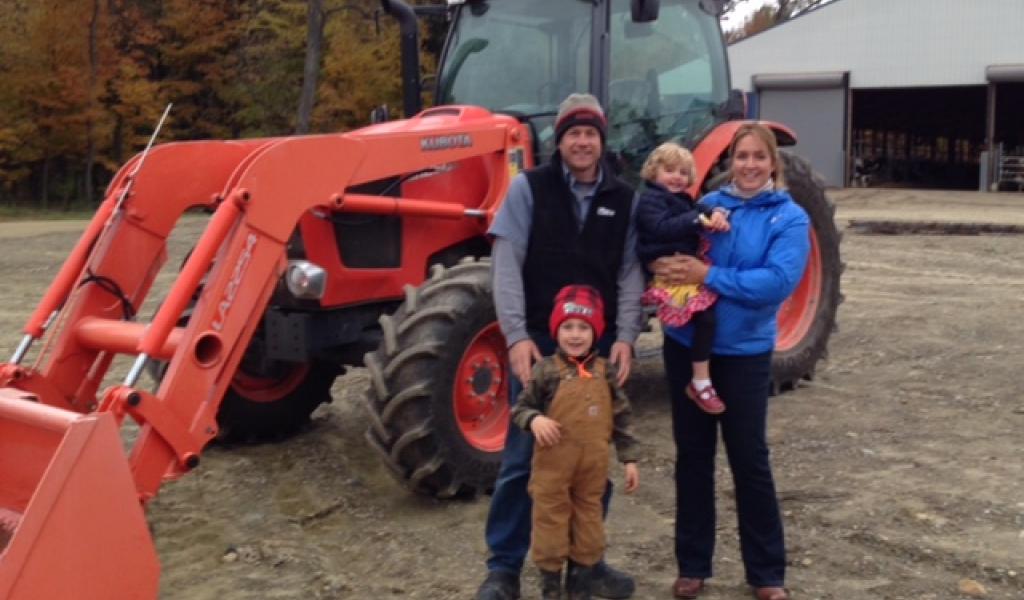 Jessica Ziehm serves as the Executive Director of the New York Animal Agriculture Coalition, and is wife to one of the partners of Tiashoke Farm, a fourth-generation dairy farm in Buskirk, N.Y., that recently expanded to 1,000 cows. They are members of the Agri-Mark Cooperative and participants in the FARM Program.

We are a dairy farm with tails – the entire tail – switch and all.  But it hasn’t always been this way.  In fact, it was just a couple years ago that we saw the writing on the wall and realized that the contemplation over banning tail docking was an issue that was not going away. And quite frankly, it was a practice that wasn’t going to make us or break us as dairy farmers.  So, I’m here to say that five years after making the conscious decision to leave our tails on our cows, we are still here (knock on wood), in a viable business with a respectable somatic cell count, content employees and fairly clean cows. (They are cows, after all.)  We did it. And it really wasn’t a big deal.  Here’s our story.

Our farm started docking tails in October of 1990. My husband remembers the exact date because it was when my in-laws were on a rare vacation and left their three teenaged sons to run the farm.  They were milking in a 50-cow tie stall barn at the time and took it upon their young selves to initiate the progressive practice of tail docking on a good portion of herd – a practice they had read about in Hoard’s Dairymen and saw firsthand on some 4-H farm tours.  To do so, they banded the cows’ tails and by the time their parents returned, more than half of the cows in the barn had short tails.

After the shock of seeing their newly coifed cows and a lengthy talk around the kitchen table, the action of docking tails made sense to my future in-laws.  Less dirty tails interfering with milkers, less urine soaked switches slapping them in the face on a cold winter morning, and from what they heard but had yet to witness, lower somatic cell counts.  It seemed like a win.

Fast forward to 2011, around the same time the AVMA and the AABP came out and opposed the practice of tail docking, my family took a hard look at the necessity of the practice.  The real benefits of tail docking, the time it takes, public perception and the well-being of our animals, especially our heifers who are on pasture all summer – all of these issues came into play as we debated.   Ultimately, the three brothers decided to stop, but the transition was not cut and dry.

We tried several different methods of trimming switches before finding one that worked for us. We tried using scissors, clippers, and even a cordless drill with a fancy (and expensive) trimmer attachment. None of them worked well, leaving us frustrated with the extra time it took, unsatisfied with the equipment we used and actually caused us to question whether we really wanted to stop docking tails, resulting in us falling off the band wagon a couple of times over the course of a year.  But perseverance paid off and we now feel as though we have a system that we are comfortable with and is effective in allowing our cows to keep their tails, and us to keep our cool.

The method that works for us is just a simple hose cutter that costs under $20. (I think we got ours from our local IBA dealer, but you can also find one like it here). We can easily grab the switch with one hand, and with the other use the hose cutter to trim the switch just below the end of the tailbone. All is takes is one cut and the entire switch is trimmed.  We trim switches once a lactation at the time of freshening, so we aren’t ever trying to do the entire herd all at once.  It’s actually a quicker and more straightforward process than docking tails ever was.

Employee safety is a priority for us, so when we quit docking tails, we started purchasing safety glasses for our workers.  We actually ordered several different styles from Grainger (here, here, here and here) and asked the crew to pick the style they liked best and ordered that style for them. We gave them the choice because we wanted our workers to like them enough to wear the glasses and be comfortable.  The protective eye wear not only protects them from tail switches, but it also shields them from the various soaps and solutions found and used in the milking parlor. The real bonus for us was when we got a gold star during our unannounced OSHA inspection this summer for having safety glasses on all of our guys. (Hey, take the win when you can!)

On the milk side of the equation, we’ve typically maintained a somatic cell count of 180-200,000, even after we started docking tails. As young managers, the three brothers thought there was a direct correlation between tail docking and quality milk.  However, they recognize now that by trimming switches, coupled with other practices on the farm including not over milking the cows, they’ve actually been able to lower their somatic cell count even more, which now runs just under 100,000. Not to mention, the cows are milking out faster too.  The transition to long tails resulted in other gains that we weren’t expecting.

Dirty tails come from dirty stalls.  But lots of other negatives come from dirty stalls too, such as dirty cows, mastitis, high cell counts, and overall, just a negative impact on milk quality. So it is even more important now that our cows have long tails to rake our sand-bedded stalls and scrape our barns during every milking, which is three times a day. We have also learned during this process that by shaping the sand in our stalls, we can help better position our cows in the stall, which helps keep the stalls and the cows cleaner. This results in not only cleaner tails, but a cleaner operation as a whole – which is not a bad image to portray to the public, our milk inspector, our veterinarian and others, including again, that friendly OSHA inspector.

And believe it or not, public perception was another factor we considered.  Perception is reality, unfortunately and we do a handful of tours a year. So, yes, we considered what the public’s image is of dairy farms.  And while, we, as a family, all recognize the benefits not getting slapped in the face with a tail, we also recognize that sole benefit doesn’t outweigh a negative image.  We found that it wasn’t necessary for us to shorten tails to accomplish our larger goals of producing healthy milk and keeping our workers safe.

In fact, during our transition to long tails, we learned a lot about making our farm a better place for not only our cows, but our employees, the quality of our product and our bottom line.  We are proud of our low somatic cell count and improved milking efficiencies. Our cows are just as clean, if not cleaner now with tails. We’ve eliminated one task of docking tails on calves and replaced it with an even easier and quicker task of trimming switches in the parlor, and our workers are safer too.  And lastly and thankfully, we are in compliance with the National FARM program that we support whole heartedly as we work together with our dairy farmer brothers and sisters across the country to assure to the public that we follow the highest standards when it comes to the care of our animals and the quality of our milk.

What a difference a “switch” can make!

Want to learn more about Jessica and her family’s farm? Connect with her on Facebook or via email at nyfarmgirl2@gmail.com.