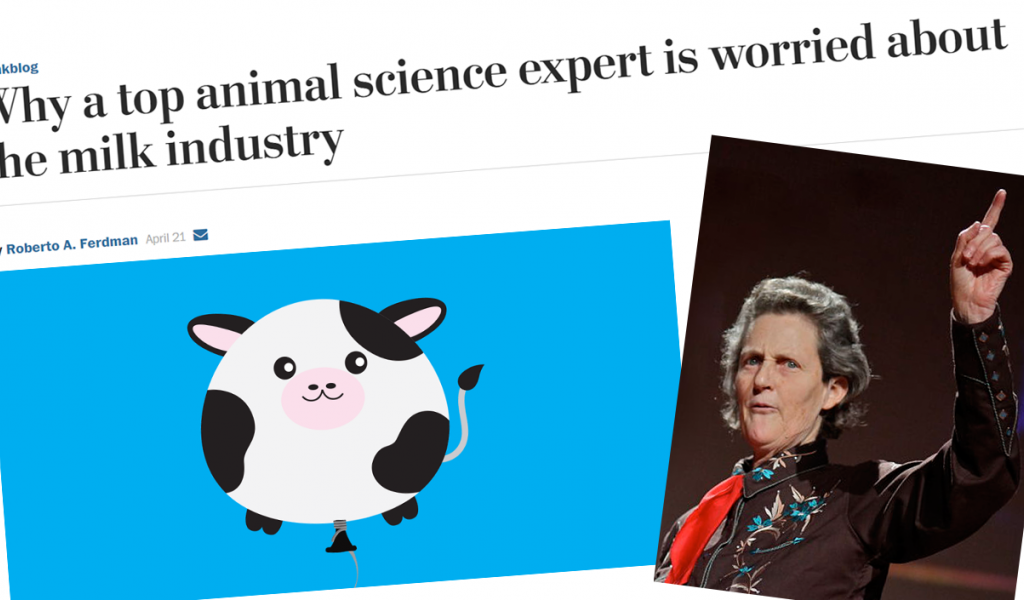 The rise in milk output from the typical dairy cow has been one of the constants in the dairy business for many decades, here in the United States, and also in most other developed nations that value dairy cattle genetics. It’s a sign that farmers are doing better with both the nature and the nurture of how cows are bred and raised.

That trend, however, drew some unwanted – and unwarranted – attention last month, when The Washington Post ran an online Wonkblog article insinuating that dairy cows and their genetics were being pushed too hard in an unhealthy direction. The main source for that assertion was Temple Grandin, perhaps the most well-known cattle behavior expert in the world.  So when she says there’s a problem, people take note.

Only, what she told The Post reporter wasn’t really what was reflected in the story.  According to the following letter she recently sent to the Colorado dairy industry, Dr. Grandin didn’t imply that two-thirds of dairies are “bad.”

What did she really mean? Here is her perspective on dairy farming, in her own words.

The Wonkblog article "Why a top animal science expert is worried about the milk industry" by Roberto Ferdman has caused considerable discussion among the dairy industry and academia. My purpose in this writing is to clarify what was said and what are my opinions of the dairy industry.

The premise of Mr. Ferdman’s 15-minute phone interview with me was to help explain the graphs showing the decrease in number of dairy cows and the increase in production per cow. During the interview I praised the excellent Colorado dairies I visited with Bill Wailes prior to his death. I also indicated that, in my opinion, excellent dairies like these represent a third of the dairies in the United States. This was interpreted by Mr. Ferdman to mean that two thirds of the dairies in the United States are bad. This is not true.

I have and will always be an advocate for animal wellbeing. However, I do believe we need to be concerned about pushing biology too far without the proper support for extremes in production. After learning that high producing cows, such as Gigi, have good longevity, I will stop making statements that relate production to longevity. Recent information from semen distributors has also shown that concentrated selection for size and production has been replaced by selection for health and longevity. It is great to have genetic options to improve traits and wellbeing. In addition, I just learned that recently published and soon-to-be published scientific studies show great improvement in lameness issues previously associated with high producing cows.

There are always areas where improvement is needed. Too many cows that should be euthanized on the farm are still arriving at packing plants. Another problem I have observed is very tall cows and some tall dairy steers are bruising their backs in transit. Truck size is limited to 13 feet 6 inches due to bridge clearance. If cattle are too tall, they may require single deck trailers.

In conclusion, I will be clearer when talking to the public. The majority of the dairy industry is doing a great job with animal well-being through improved facilities, workforce management, feeding and selection, but there are still a few who really hurt all of animal agriculture when poor decisions are made. While I praise the majority, we all need to work together to improve the others.