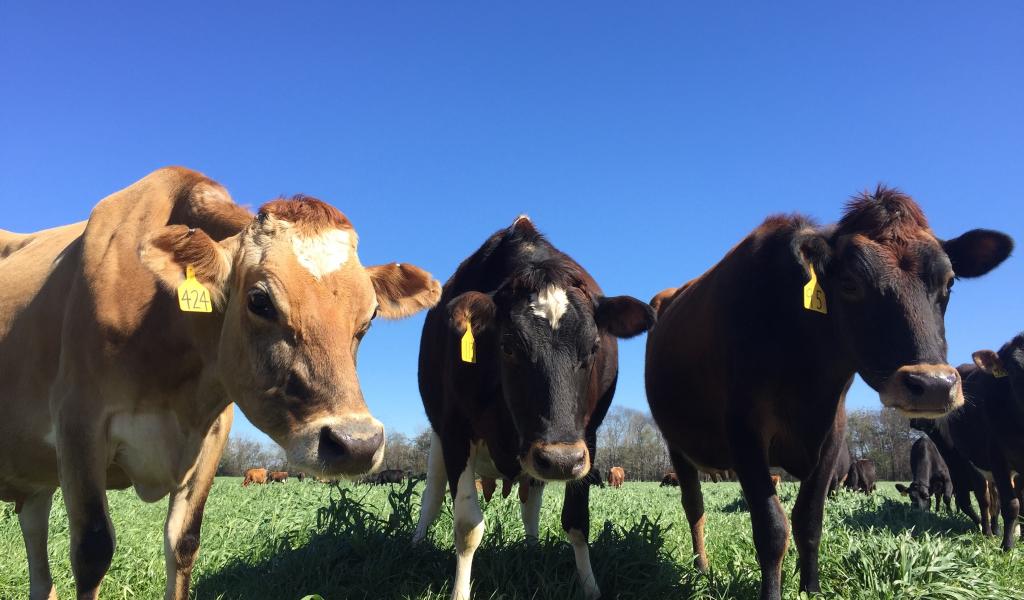 This article originally appeared in the March/April 2016 edition of Pipeline, a publication from the Maryland & Virginia Milk Producers Association.

Dehorning is one of those tasks every dairy farmer would love to never have to do again. While it seems like a fairytale concept, more and more dairy farmers are incorporating polled genetics into their herds and making that mythical dream more realistic than ever before.

The truth is, polled genetics are gaining popularity. According to Lindsey Warden, Executive Director of Holstein Genetic Services with Holstein Association USA, 318 registered animals coded as polled in 2005. In 2010, that number grew to 819, and in 2015, the number of polled registered Holsteins tallied to 4,097. “That is just about 1% of our total animals registered, but the growth and interest in polled is clear,” noted Lindsey.

Thanks to the help of dedicated breeders, Artificial Insemination (AI) companies, and breed associations, polled genetics are now available in just about every dairy breed. Currently, Holsteins, Jerseys, and Red and Whites have the largest polled populations.

John’s father, David, had a herd of grade and crossbred Guernseys, but David wanted to transition his herd to registered Holsteins. One fateful purchase of a polled Holstein from Wisconsin launched the Burkets interest in polled genetics. “My dad wasn’t aware that this cow he purchased was polled. She turned out to be the best producer on our farm, and the polled part was secondary,” John said. “She became the foundation cow for all of our polled animals.”

Today, 90 percent of the Burket’s herd is polled. “This is the highest it’s ever been. We have gradually increased the percentage over the years,” John said. The Burkets 87-cow milking herd consists of registered Holsteins and Red and Whites.

“Fortunately for us, our best cows were in our polled family and our highest producing cow was polled. We tried to bring in the best genetics from the horned population to keep pace,” said John, who is a former President of the Pennsylvania Holstein Association and Holstein Association USA Director.

John and his family also raise registered polled bulls. Their bull Burket Falls ABC was the first known polled Holstein to enter the AI leagues and was leased to American Breeders Service.

Fellow member, Jimmy Conner of Floyd, Virginia, has used polled Red and White Holstein AI studs for the past 15 years. He aims to increase the number of polled animals in his herd of 65 Holsteins and Red and Whites.

“I thought I might try the polled genetics because nobody likes to dehorn,” Jimmy said. To start, he purchased a few bulls, but 15 years ago, there was a very limited supply.

“To me, in the last five years, there have been more polled genetics in black and white Holsteins and it’s really taken off. There are now top-of-the-line cows with some new polled bulls,” Jimmy added.

About 10 percent of Jimmy’s herd is polled with 15 percent carrying the polled gene, and 90 percent of AI semen he uses is polled.

Why so many horned cattle?

Despite the growth in polled popularity, horned cattle are still more prevalent today as many producers have opted to breed for production, confirmation, health, and other traits, instead of strictly for polled animals. And while the number of polled AI bulls has increased recently, the total number of sires providing the polled gene is still limited.

“Breeding for polled animals is a slow process,” Jimmy said. “Depending on the animal, you don’t always get the polled results in one generation. When using heterozygous bulls, it takes three generations.”

Despite representing a small population of available genetics, the quality of those bulls is increasing at a dramatic rate. “There are already polled bulls that are of similar genetic merit to some of the elite horned bulls. I suspect in the not-toodistant future, we will have polled animals that are rivaling the horned bulls at the top of the genetic merit lists - the gap between the two categories narrows a little more each year,” said Lindsey.

To producers who are hesitant to try using polled genetics, Jimmy noted “I don’t think they’d have any problem using any of these bulls. They all have good genetics behind them.”

Previously, there was the thought that breeding for polled animals would be a loss in net merit or production, but today it is less of an issue. “I can say today with confidence that if you breed for polled, you won’t lose other traits,” John said.

According to Lindsey, the use of genomics has been helpful to make faster progress in core production and health traits that are important to dairy producers, while still selecting for the polled gene.

The Burket’s animals are proof that polled animals can excel in type and production. More than half of the 150 Burket Falls bred animals that have classified as excellent are polled, with several of their polled animals boasting winnings at national shows.

“I think in time, not only our herd, but the entire Holstein breed will become polled,” John said. “I feel strongly that down the road, horned cattle will be discriminated against. Polled is the dominate trait, so it’s easier to breed for. As producers, we need to be ahead of the eight-ball; we should be breeding for polled animals voluntary, instead of waiting until we have to,” John said.

“We have had polled cows with production in the 25,000 to 30,000-pound range,” Jimmy added. Jimmy envisions that, in five years, his herd will be at least half polled or more.

Consumers, like dairy farmers, would like a world without dehorning. While that fairy tale isn’t a reality yet, dairy farmers like John and Jimmy are working towards making that polled utopia a reality.